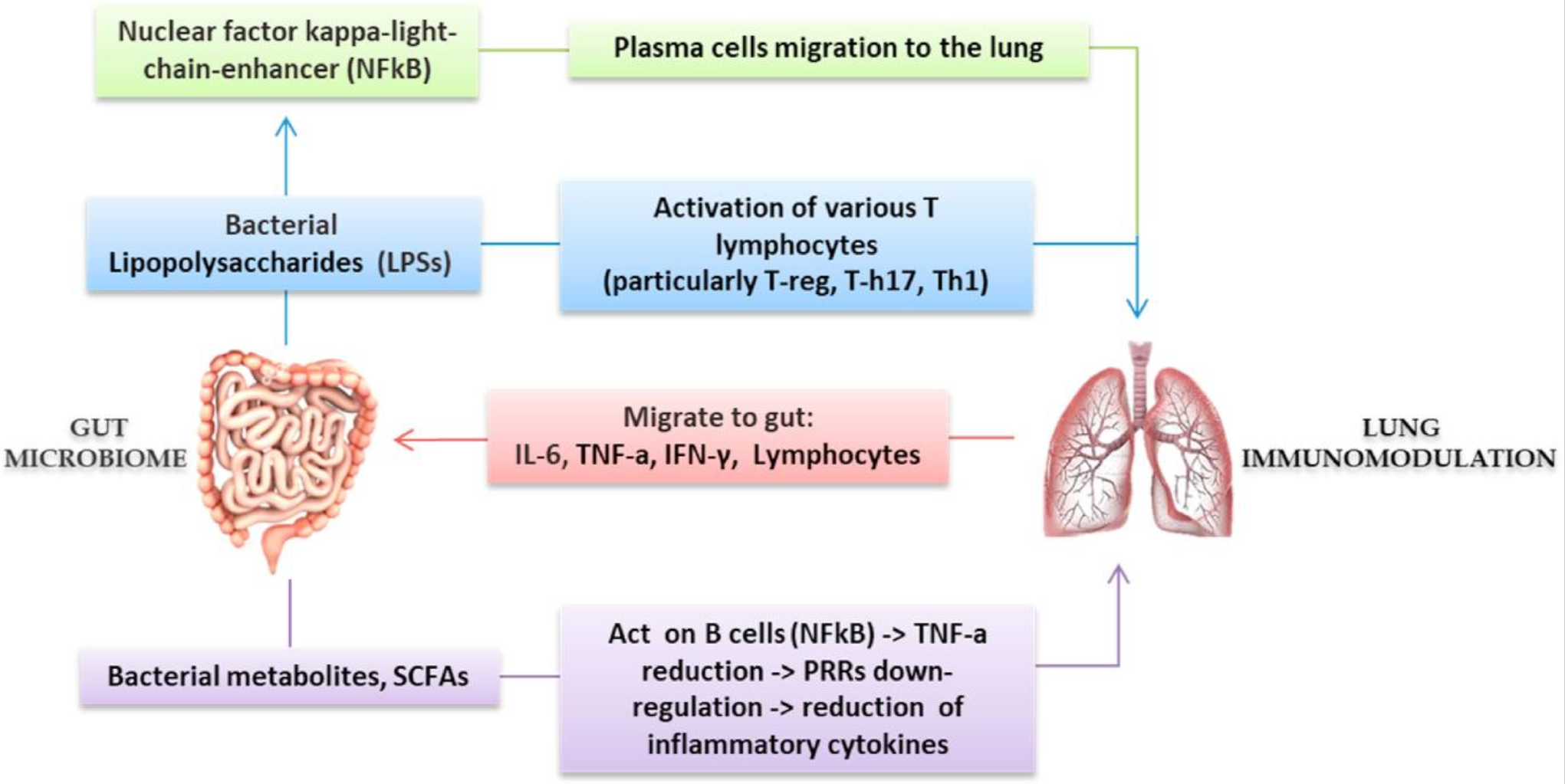 Potential beneficial role of probiotics on the outcome of COVID-19 patients: An evolving perspective

A beneficial association of microorganisms in the human body was first established by Döderlein in 1892. Then, bacteria from fermented milk products have been tested for their health-promoting properties by Metchnikoff in 1908. Much progress has been made in microbiology with technological advances, especially regarding genetic analysis. In 2001, the Nobel laureate Joshua Lederberg introduced the term “microbiome”, including the entire genetic patrimony of all living microorganisms in the human body (gastrointestinal system, skin, respiratory system, urogenital system etc.). Instead, the term “microbiota” refers to the specific and unique composition (genera/species) of this microbial population, differs from one person to another, and influences human health. While the microbiota remains largely unchanged throughout life and very similar between two individuals, microbiome constantly changes and differs significantly between individuals, even if they are homozygous twins. Hence, microbiome has its own biological importance and should be studied as a part of the entire human genome .

To understand the central relationship between microbes and the human body many investigations have been made, particularly for a better comprehension of its role in human health. In 2008, an international project, the so called “Human Microbiome Project”, was designed by the US National Institutes of Health (NIH) [1,3].

Human microbiome must be considered as a “metabolic system” that interacts with the host and performs many necessary functions for human health. Continuous and reciprocal relationships (crosstalk) between the host and all the microbiota sites define several axes, such as the gut/lung or gut/brain or gut/skin. For instance, through the mesenteric lymphatic system, intact bacteria and their metabolites enter the systemic circulation and influence the pulmonary immune response (gut/lung axis). Through this way intestinal metabolites, mainly produced by bacterial fermentation of dietary fiber, such as short-chain fatty acids (SCFAs), significantly influence local gut immunity but also distant organs. SCFAs derived from gut are able to suppress lung inflammation. Dendritic cells (DCs), the antigen-presenting cells of the mammalian immune system, stimulate T-cells subpopulations in mesenteric lymph nodes and gut lymphatic tissue to produce regulatory cytokines. After airways immune-stimulation, these T-cells move from the gut to the respiratory system, providing protection and stimulating an anti-inflammatory response In fact, gut microbiota rebalancing has been shown to reduce ventilator-associated enteritis and pneumonia.

Opposite to the healthy condition of eubiosis is the so called dysbiosis. The altered bacterial balance causes the translocation of cytokines, endotoxins and microbial metabolites in the general circulation to other organs, such as the lung. Conversely, respiratory inflammation (due to many causes, e.g., respiratory viral infections due to SARS-CoV-2), causes local dysbiosis and, in turn, the translocation of microbial metabolites and toxins to other organs, such as the gut. Physiological changes in the human microbiota with age leads to a “physiological dysbiosis”, with less diversification in microbial composition, aggravated in case of comorbidity (hypertension, diabetes, chronic inflammatory bowel diseases, etc.). Therefore, to establish the condition of eubiosis, “good” bacteria are required. The concept of probiotics as a food with positive effects was firstly used by Parker RB in 1974 and then recognized by the Food and Agriculture Organization (FAO), and more recently by the Word Health Organization (WHO).

On December 31, 2019, a novel Coronavirus strain was reported in Wuhan, China, subsequently identified as a new Coronavirus beta strain ß-CoV from Group 2B, with a genetic similarity of approximately 70% to SARS-CoV. It was denominated “Severe acute respiratory syndrome coronavirus 2 (SARS-CoV-2)”, which is the cause of COVID-19, the pandemic ongoing till date. On December 20, 2020, more than 50-million SARS-Cov-2 infections have been confirmed worldwide. Our efforts are to investigate alternative/supporting therapeutic remedies in the fighting against this virus. Particularly, we think that SARS-CoV-2 infection course could influenced by many factors, including intestinal dysbiosis. In this document we analyze available data on the association between SARS-CoV-2 and human microbiota...Read full article here.

Why do we need dietary fiber?
How Probiotics Can Help Your Yeast Infection
The Most Common Gastrointestinal Diseases
The Microbiome as a Therapy in Pouchitis and Ulcerative Colitis
5 Foods that Fight Fatigue and Fill You with Energy
Importance of Dietary Changes During the Coronavirus Pandemic: How to Upgrade Your Immune Response
Few Secrets to Whiten Your Teeth Naturally Teeth Whitening, Whiten Your Teeth
Dysbiosis in the ICU: Microbiome science coming to the bedside
Potential beneficial role of probiotics on the outcome of COVID-19 patients: An evolving perspective
Optimise your immunity with the right foods