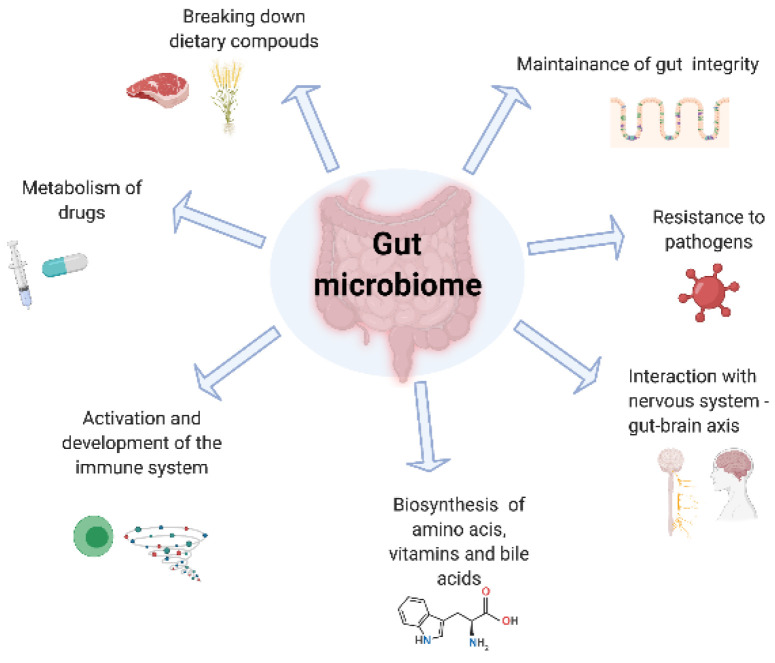 The Microbiome as a Therapy in Pouchitis and Ulcerative Colitis

The gut microbiome has been implicated in a range of diseases and there is a rapidly growing understanding of this ecosystem’s importance in inflammatory bowel disease. We are yet to identify a single microbe that causes either ulcerative colitis (UC) or pouchitis, however, reduced microbiome diversity is increasingly recognised in active UC.

The gut microbiome has been implicated in a range of diseases and there is a rapidly growing understanding of this ecosystem’s importance in inflammatory bowel disease. We are yet to identify a single microbe that causes either ulcerative colitis (UC) or pouchitis, however, reduced microbiome diversity is increasingly recognised in active UC. Manipulating the gut microbiome through dietary interventions, prebiotic and probiotic compounds and faecal microbiota transplantation may expand the therapeutic landscape in UC. Specific diets, such as the Mediterranean diet or diet rich in omega-3 fatty acids, may reduce intestinal inflammation or potentially reduce the risk of incident UC. This review summarises our knowledge of gut microbiome therapies in UC and pouchitis.

The human gut microbiome represents the collective genomes of a vast range of microorganisms, also referred to as the microbiota, which include bacteria, virus, archaea and protozoa, that together form an extremely complex ecosystem capable of communicating with the immune system and determining an individual’s predisposition to develop disease states. Gut microbiota are responsible for a range of metabolic processes for the host including digesting food specifically through the breakdown of complex carbohydrates and proteins, regulation of the immune function, protecting against pathogens and production of micronutrients .

The gut microbiome composition is determined by a number of host and environmental factors including mode of delivery, type of feeding at birth, use of antibiotics, pathogen exposure, diet, smoking, pollutants as well as many unknown factors . Specific bacterial phyla, such as Firmicutes and Bacteroides, represent approximately 90% of the human gut microbiota, alongside smaller proportions of Proteobacteria, Actinobacteria and Verrucomicrobia . Dysbiosis is most commonly defined as perturbations in the composition of commensal communities relatively to those found in healthy individuals. For example, an increased Firmicutes/Bacteroidetes ratio may be associated with disease states, such as obesity, type 2 diabetes and metabolic syndrome. Reduced Firmicutes diversity, especially reduced levels of F. prausnitzii, was observed in the gut microbiota of patients with inflammatory bowel disease (IBD) .

Inflammatory bowel disease represents a group of chronic intestinal disorders, subdivided into Crohn’s disease (CD) and ulcerative colitis (UC). Bowel inflammation, responsible for symptoms of abdominal pain and bloody diarrhoea in UC, may be partly mediated by changes in the composition of the gut microbiota. UC currently affects 10 per 100,000 people annually, with a prevalence of 243 per 100,000, thus amounting to approximately 146,000 patients diagnosed with UC in the UK . Similarly to other autoimmune diseases, the precise aetiology of UC has not been determined and is likely multifactorial, involving complex interactions between the genome and epigenome, the environment and the microbiome. Patients with moderate-to-severe UC can be treated with biological agents, whose immunosuppressive effects strive to achieve the endpoint of mucosal healing of the bowel. However, pooled rates of mucosal healing in UC (33–45%) were relatively modest, combined with non-negligible rates of adverse events, as observed in a network meta-analysis of clinical trials. Therapies involving manipulation of the microbiota may thus expand the therapeutic arsenal of UC.

When trying to understand the role of the gut microbiome on the aetiology of UC, longitudinal data are lacking. A particular challenge remains that we still are unable to predict those that will develop UC and therefore we lack the ability to map the microbiome prior to the disease onset. In an attempt to circumnavigate this issue, a model for UC may provide us unique insights into the role of the gut microbiome in IBD. In such a model, the key will be to explore microbiome changes from a period of health to one of disease state, mapping the microbiome changes. Ideally, these changes need to occur over a period where longitudinal data is possible, minimising loss to follow-up.

A potential model for understanding dysbiosis within different UC phenotypes is the ileal pouch-anal anastomosis (IPAA), which is a surgically constructed intestinal reservoir connecting the most distal part of the small bowel to the anal canal. Total proctocolectomy may be indicated in patients who remain refractory to medical therapy or those at high risk of colorectal malignancy; in order to restore intestinal continuity and avoid a permanent ileostomy, an IPAA can be formed. Inflammation of the IPAA, also called pouchitis, is a relatively frequent complication, as shown by a cumulative risk of one or more episodes ranging from 15–53%. Incidence of pouchitis seems highest within the first year of pouch formation, allowing longitudinal data in a short timeframe. Observed predictors of pouchitis include prior smoker status, associated extra-intestinal manifestations, primary sclerosing cholangitis and a genetic marker called interleukin-1 receptor antagonist gene allele 2. The mainstay of treatment for pouchitis is antibiotics and many studies have implicated the importance of the microbiome in both aetiology and treatment.

This review aims to summarise the potential role of the microbiome as a therapeutic target in both UC and pouchitis.

1.1. Interactions between the Gut Microbiome and the Intestinal Lining in the Context of Intestinal Inflammation

The gut microbiome seems an integral part in maintaining the tight junction integrity. Evidence has suggested that perturbations in the gut microbiome can lead to an increase in gut permeability, a decrease in the thickness of the protective mucus layer which culminates in pathogen invasion. The goblet cells, found in the intestinal lining, produce a thick mucus layer which acts as a mechanical barrier, as well as chemical, in that it supports the presence of antibacterial proteins, such as secretory IgA and lactoferrin . Therefore, a loss of goblet cells, as found in chronic bowel inflammation, leads to a loss in mucosal integrity and impaired barrier function. This culminates to an increase in bacterial translocation altering the T-cell profile and pro-inflammatory cytokines leading to tissue damage, a destabilised microbiome and further tissue damage. Short-chain fatty acids (SCFA), mainly butyrate, are produced via selective bacterial fermentation of resistant carbohydrates. SCFA play an important role in the maintenance of the epithelial barrier and regulation of the immune system, through increased intestinal IgA production, induction of tolerogenic dendritic cells and higher regulatory T-cell percentages. Indeed, bowel inflammation has been associated with increased rates of intestinal regulatory T lymphocytes, however it remains unclear which subsets of regulatory T cell exert proinflammatory effects in UC.

From an immune perspective, the gut microbiome is in constant communication with the immune system to help with immune tolerance and disease pathogenesis. Breakdown of the epithelial innate immune function may also lead to the invasion of the intestinal lining by pathogenic bacteria. Indeed, defective autophagy impairs lysosomal digestion and clearance of pathogenic bacterial strains. Activation of different signalling cascades, mediated by the Toll-like receptors (TLR) located on the surface of intestinal epithelial cells and the downstream nuclear factor-κB (NF-κB) pathway, leads to the production of cytokines and recruitment of the adaptive immune system, thus enhancing bacterial clearance. Thus, genetic polymorphisms of TLR, inhibition of the NF-kB pathway and decreased release α-defensin seen in variants of the caspase recruitment domain/nucleotide-binding oligomerisation domain (CARD/NOD family) all contribute to increased intestinal permeability and subsequent bowel inflammation, as seen in UC.

Through advancing next generation sequencing technologies, we have been able to understand both the composition of the gut microbiota and also its functionality. Figure 1 summarises the critical roles of the microbiome in drug metabolism, absorptive and secretory capacities of the intestinal lining. Although data remain heterogenous, consistent findings of perturbations in the gut microbiota in patients with UC compared with healthy controls persist. In an inception cohort, Schirmer et al. evaluated the microbial taxonomic changes of 405 paediatric new-onset, treatment-naïve UC patients, who received either corticosteroids or 5-aminosalicylic acid drugs. Interestingly, after 52 weeks of follow-up, poor response to therapy correlated with an increased resemblance to the bacterial taxa of the oral cavity, such as higher levels of H. parainfluenzae, likely explained by intestinal inflammation and strain-specific adaptation . However, it remains unclear whether such microbial changes may be the cause or the consequence of active bowel inflammation.

The role of the gut microbiome.

Interestingly, microbial signatures may differ between UC and CD despite their similar clinical and epidemiologic profiles. In a Spanish cohort of 34 patients with CD and 33 with UC, those afflicted with CD showed, in faecal samples, higher rates of unstable microbial communities compared to patients with UC, as well as increasingly altered microbiota composition, such as a lower relative abundance of Faecalibacterium and a higher relative abundance of Fusobacterium and Escherichia. The composite microbial biomarkers were validated as a diagnostic tool in Spanish and Belgian cohorts, demonstrating a sensitivity of 80% and a specificity of 90.9% in distinguishing CD from UC.

1.2. Influences of the Gut Microbiota on the Development of Pouchitis

The microbiota of a patient with pouchitis differs from a patient without pouchitis. Specific patterns have found persistence of Fusobacter and Enterobacters associated with the disease state and the absence of specific bacteria such as Streptococcus species in the inflamed pouch. Clinically, pouchitis can be treated with antibiotics and hence provides plausibility that the microbiome may influence the course of pouchitis. Of interest, mucosal inflammation in the pouch is concentrated in areas where bacterial concentration is highest. From an immune perspective, it has been noted that pouchitis-derived bacterial sonicates from metronidazole-sensitive bacterial species stimulate healthy patients’ mononuclear cells significantly more than corresponding sonicates from non-pouchitis patients [24].

Potentially, the closest direct link to the microbiome having an influence on pouchitis came from a study which highlighted that baseline microbiome prior to colectomy could predict those that developed pouchitis and those that did not and hence provides suggestions that altering the gut microbiota may influence the pouch functionality.

Why do we need dietary fiber?
How Probiotics Can Help Your Yeast Infection
The Most Common Gastrointestinal Diseases
The Microbiome as a Therapy in Pouchitis and Ulcerative Colitis
5 Foods that Fight Fatigue and Fill You with Energy
Importance of Dietary Changes During the Coronavirus Pandemic: How to Upgrade Your Immune Response
Few Secrets to Whiten Your Teeth Naturally Teeth Whitening, Whiten Your Teeth
Dysbiosis in the ICU: Microbiome science coming to the bedside
Potential beneficial role of probiotics on the outcome of COVID-19 patients: An evolving perspective
Optimise your immunity with the right foods