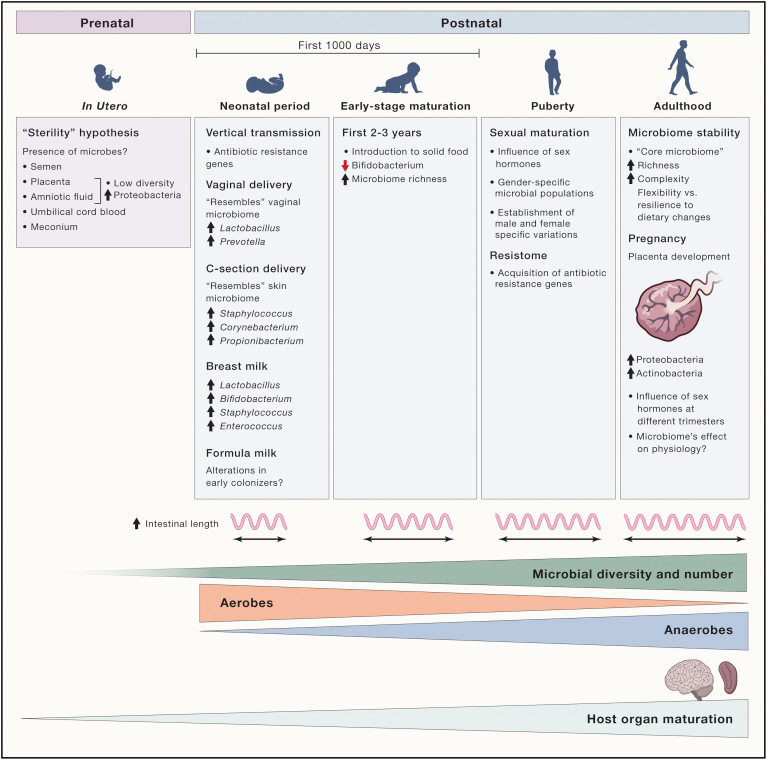 Our Gut Microbiome: The Evolving Inner Self

﻿The composition of the gut microbiome changes with host’s age. According to the existing notion, our embryo is sterile; however, presence of microbes in semen, placenta, amniotic fluid, umbilical cord blood, and meconium contests this hypothesis and suggests colonization of the fetus in utero. The mode of delivery and the choice of diet &#40;breast milk or formula milk&#41; after birth influence the colonization process in the newborn. With age, introduction to solid food brings in additional complexity to the immature, less complex microbiome.

Here, we provide snapshots of the evolving microbial-host associations and relations during distinct milestones across the lifespan of a human being. We discuss the current knowledge of biological symbiosis between the microbiome and its host and portray the challenges in understanding these interactions and their potential effects on human physiology, including microbiome-nervous system inter-relationship and its relevance to human variation and individuality.

Until recently, it was generally assumed that newborns are sterile and that the initial microbial contact occurs during birth—a dogma first proposed by Tissier. The human placenta is thought to act as a barrier that selectively prevents maternal antibodies, toxic molecules, and microorganisms from translocating into the fetal bloodstream, thus maintaining the “sterility” of the growing offspring...continue reading

The relatively simple maternally acquired microbiome gradually matures and acquires greater complexity upon introduction of dietary supplements, solid food, and withdrawal from breast milk to increasingly resemble that of a typical omnivore. In particular, the dominance of Bifidobacteria in the microbiome, best suited to process milk oligosaccharides, diminishes with the introduction of solid food...continue reading

Adolescence and puberty constitute a phase of life associated with major physiological changes related to sexual maturation and a transition toward adulthood. This period of major developmental changes is predominantly driven by hormones and an intense inter-organ crosstalk including organs like the brain, skin, and genitalia...continue reading

The adult microbiota is relatively more stable compared to that of early life, probably due to the development of what looks like a core community of permanent colonizers that buffer exogenous insults like stress and exposure to antibiotics and help restore the original microbial configuration upon these challenges. Thus, it seems like a core gut microbiome exists at the functional level (what they do) among healthy adults, despite the high level of individual variation...continue reading

As humans age, they universally develop a gradual loss of function in multiple organ systems related to growth, metabolism, energy homeostasis, and immunity. Several studies have attempted to examine the aging-related changes in the dynamics of the gut microbiome by comparing the microbiome composition of infants and adults to those of elderly people and centenarians. One of the pioneering studies in this field that characterized the microbiome profiles of 161 elderly Caucasian individuals using 16S rDNA sequencing revealed a dramatic shift from Firmicutes that dominate the gut microbiome of young adults toward Bacteriodetes in the elderly aged over 65 years...continue reading

An interesting approach aimed at understanding potential roles of the gut microbiome in aging and longevity involves the exploration of the microbiome of extremely elderly individuals. Studies exploring the microbiome at the extremes of human lifespan have pointed out that the differences in the gut microbiome composition between young adults and elderly subjects (separated by ∼40 years) are smaller than the differences observed between the elderly people and centenarians, separated by <30 years of life...continue reading

Impact of the Microbiome on Lifespan

The contribution of the gut microbiome to human lifespan has not been studied to date. However, several studies in simpler life forms and recently in animal models represent the beginning of the exploration into how genomes within metaorganisms may interact to influence host longevity. Invertebrate model systems such as the fruit fly Drosophila melanogaster and the nematode Caenorhabditis elegans were used as attractive and proof-of-concept models for studying the possible microbiome-aging axis, as they harbor a microbiota both in nature and in the laboratory...continue reading

The Dynamics of the Microbiome

In multiple association studies, the gut microbiome seems to feature hallmark characteristics in different life phases. Starting with a relatively simple microbial composition, which appears to be impacted by the mode of delivery at birth, the offspring matures with an increased microbiome complexity associated with environmental and physiological influences, such as nutrition, lifestyle, hormonal changes, immunity, and possibly microbiome-gut-brain axis crosstalk. Although considered flexible and influenced by environmental cues, the microbiome’s composition and function is probably dominated by a slowly changing, vertically transmitted core microbiome coupled with a more “flexible” microbial component that responds more quickly to environmental dynamics...continue reading

Probiotics: Protecting Our Health from the Gut
Why do we need dietary fiber?
How Probiotics Can Help Your Yeast Infection
The Most Common Gastrointestinal Diseases
The Microbiome as a Therapy in Pouchitis and Ulcerative Colitis
5 Foods that Fight Fatigue and Fill You with Energy
Importance of Dietary Changes During the Coronavirus Pandemic: How to Upgrade Your Immune Response
Few Secrets to Whiten Your Teeth Naturally Teeth Whitening, Whiten Your Teeth
Dysbiosis in the ICU: Microbiome science coming to the bedside
Potential beneficial role of probiotics on the outcome of COVID-19 patients: An evolving perspective