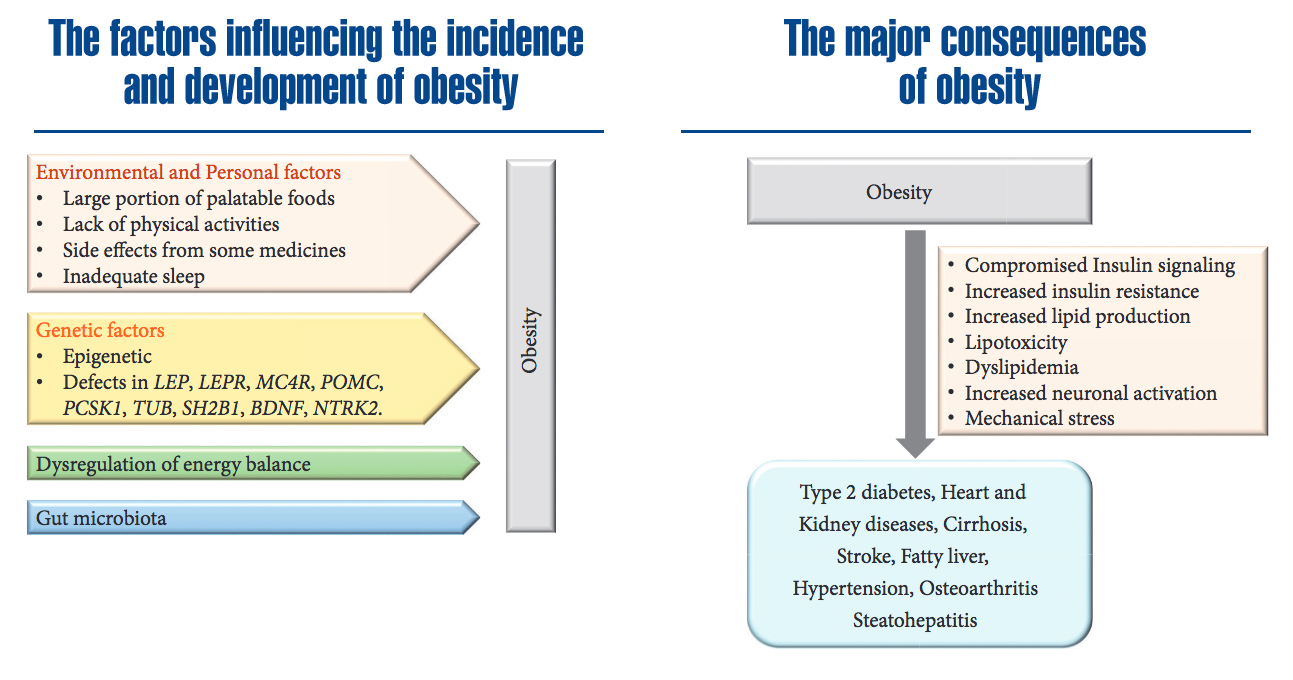 Probiotics are now recognized for several health benefits and they have been recommended as a complementary therapeutic agentfor metabolic disorders. Obesity is an altered health condition, which is a resultant of irregular energy intake and energy balance,changes in gut microbiota, and improper diet with the influence of genetic makeup and environmental factors. Several studiesrevealed the influence of probiotic supplementation on obesity-associated consequencesin vitro,in vivo, and in human clinicalstudies. The current manuscript discussed the factors influencing the occurrence of obesity, the interplay between microbiomeand obesity, the effect of the probiotic intervention on the health status of obese people, and possible mechanism of antiobesityactivity of probiotics. The literature survey revealed that the antiobese activity of probiotics might be associated with their abilityto alter the intestinal microbiota, remodeling of energy metabolism, alter the expression of genes related to thermogenesis, glucosemetabolism, and lipid metabolism, and change the parasympathetic nerve activity. Further intense research is necessary to figureout the best probiotic or synbiotic mixture and optimum dosage and duration of the intervention to reduce obesity and prevent therecurring of obese condition.

1. IntroductionFood habits and lifestyle greatly influence the quality of thelife and health status of humans. The improper diet andlifestyle are associated with several metabolic disorders andare the greatest global health issues [1]. The environmentalfactors, maternal health, and host genetic makeup are alsoinvolved in the development of metabolic disorders anddiseases. The composition of gut microbiota (GM) and itsfunction is altered due to the consumption of improperdiet, which affects the health status of the host, specificallyassociated with the development of obesity. GM is involvedin the energy balancing, intestinal integrity, and immunityagainst invading pathogens; thereby GM controls the overallhealth status of the host [2–4].GM can be positively altered by the supplementation ofprobiotics, a group of beneficial microbes that confers healthbenefitswhenconsumedinanadequateamount[5].Probi-otic intervention has been recognized for the treatment orbetterment of several ill-health conditions such as diarrhea,allergy, gastrointestinal disorders, and metabolic syndromes[6–11]. The probiotic supplementation also slows down theaging-associated health issues by positive regulation of GM[12, 13].Obesity is an altered health condition, which is a resultantof irregular energy intake and energy balance, changes in GM,and improper diet with the influence of genetic makeup andenvironmental factors. Obesity is defined as an accumulationof excessive fat that impairs health status [14]. The obesityrate is drastically increased over the last decades [15], and it has been estimated that about 1.9 billion adults wereoverweight and, among them, 650 million adults are obesein2016[16].Theoverweightwithsomeill-healthconditionssuch as diabetes, hypertension, and cardiovascular diseases isconsidered as morbid obesity [14, 17].

Importance of Dietary Changes During the Coronavirus Pandemic: How to Upgrade Your Immune Response
Dysbiosis in the ICU: Microbiome science coming to the bedside
Potential beneficial role of probiotics on the outcome of COVID-19 patients: An evolving perspective
Optimise your immunity with the right foods
7 myths about probiotics, busted. Healthy gut, healthy brain!
Intestinal Flora as a Potential Strategy to Fight SARS-CoV-2 Infection
Enhancing immunity in viral infections, with special emphasis on COVID-19
Current status of potential therapeutic candidates for the COVID-19 crisis
Covid-19 Corona Virus, Probiotics, Respiratory Viral Infections, Vitamins and Immunity.
Individual risk management strategy and potential therapeutic options for the COVID-19 pandemic