Lactobacilli and Bifidobacteria are Gram-positive lactic acid-producing bacteria that constitute a major part of the normal intestinal microflora in animals and humans. These friendly bacteria play a key role in enhancing resistance to colonization by exogenous, potentially pathogenic organisms.

Lactobacilli: Lactobacilli are Gram-positive, non-spore-forming rods or coccobacilli. They have complex nutritional requirements and are strictly fermentative, aerotolerant or anaerobic, aciduric, or acidophilic.

Bifidobacteria: Bifidobacteria constitute a major part of the normal intestinal microflora in humans throughout life. They appear in the stools a few days after birth and increase in number thereafter. The number of bifidobacteria in the colon of adults is 1010 - 1011 CFU/gram, but this number decreases with age. Also, demographic differences affect the number and species of bifidobacteria.

Bifidobacteria are nonmotile, nonsporulating Gram-positive rods with varying appearances. Most strains are strictly anaerobic. B. longum may be considered the most common species of bifidobacteria, being found both in infant and adult feces. This species is closely related to B. infantis, which often leads to identification problems(8). Below are some pictures of probiotic bacteria.

The condition and function of the gastrointestinal tract are essential to our well-being. After the respiratory tract, the GI tract constitutes the second largest body surface area, comparable in size to a tennis court. During a normal lifetime, about 60 tons of food pass through this canal. 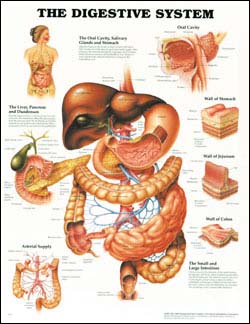 The human intestinal microflora is highly important to the host for several reasons. First and foremost, microflora benefits the host by increasing resistance to new colonization as well as by protecting against the overgrowth of already-present potentially pathogenic organisms. Another function important to the host is the high metabolic activity of the intestinal flora. The extent of this activity has been claimed to be similar to that of the liver. The use of antibiotics is the most common cause of intestinal microflora inbalances.

For thousands of years, microbial cultures have been used to ferment foods and prepare alcoholic beverages. In Genesis, references are made to the preparation of fermented milk.

It is likely that the first scientific assessments of probiotics were made in 1908, based on the work of the Russian Nobel Prize Laureate Elie Metchnikoff. He first hypothesized that a high concentration of lactobacilli in intestinal flora was important for health and longevity in humans. Indeed, we now know that intestinal flora plays an important role in health: stimulating the immune system, protecting the host, and aiding digestion, and assimilation of food. Yet, the importance of these bacteria in the gastrointestinal “GI” tract has been neglected for a long time, while the focus was merely placed on enteric pathogens and other factors leading to gastrointestinal "disorders".

The composition of the gastrointestinal flora differs among individuals, and also during life within the same individual. Many factors, such as diet, climate, aging, medication (especially antibiotics), illness, stress, pH, infection, geographic location, race, socioeconomic circumstances, and lifestyle can upset this balance(1). Interactions of typical intestinal bacteria may also contribute to stabilization or destabilization. A state of balance within the microbial population within the GI tract can be called "eubiosis" while an imbalance is termed "dysbiosis".

For optimum "gut flora balance", the beneficial bacteria, such as the gram-positive Lactobacilli and Bifidobacteria, should predominate, presenting a barrier to invading organisms. The majority of the intestinal microflora in a healthy person should be good bacteria. The greater the imbalance, the greater the symptoms. The use of probiotics may be the most natural, safe, and common sense approach for keeping the balance of the intestinal ecosystem.

MICROBIAL NUMBERS AND THE INTESTINAL ECOSYSTEM

The 25-35 foot long GI tract of an adult human is estimated to harbor about 100 trillion viable bacteria. This is approximately 10 times the total number of cells in the human body. These live bacteria account for around 2-3 lbs of a body's weight and are known as intestinal or gut flora. Viruses, fungi, and protozoa can also be present, but these normally form only a minor component of the total resident population of microorganisms in healthy individuals. 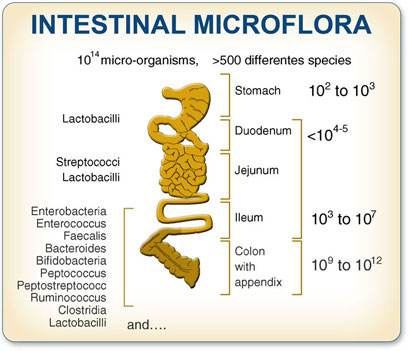 As indicated in table 1, Bifidobacteria account for approximately 90% of the total colonic beneficial microflora. Populations of Lactobacilli are several orders of magnitude smaller than Bifidobacteria.